The methods for continually unleashing more of the vast measure of happiness are almost the complete opposite of the methods we currently employ in our efforts to obtain the trivial pleasures offered by today’s normal life. And the vast measure of happiness is free. This. This changes everything. The reasons we once had for organizing our lives and societies the way we do today are gone.

Experiment 3 is about making changes. Right now our starting point is Experiment 0, our normal lives where we practice a master idea at the lowest level of understanding. And where we always trust the spin-off ideas that reflect the master idea we’re practicing. This means the situation as we begin the new experiment is one where we’re shackled to established ideas and to the whole established order of things, the Establishment. Shackled by our trust. The first step in Experiment 3 is to unlock the shackles by outlining where the Establishment and established ideas are really taking us. 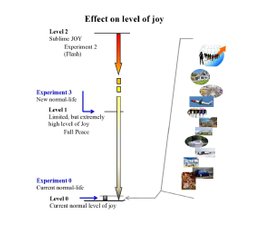 Which people whom we admire – hold us down at the low level of happiness?

Which of the institutions we trust – chain us to the lowest level of happiness?

Which of our goals – stand between us and the high levels of happiness?

Which of the ideas we support – keep us from the great Happiness and Fulfillment?

Changing everything – the first step

The master idea we practice is the master idea we believe in. Trust, gratitude, support, admiration, respect, our interpretation of good morals, humane values, positive development, progress… are all spin-off ideas that law-abidingly follow the practiced master idea. The master idea most people practice today leads automatically to trust, support, admiration, and respect for the same people, the same ideas and goals, and the same institutions and methods that usher us to the lowest level of joy. Almost everything we do in our private lives are things we believe in and support because we think doing them will bring us more happiness. But in reality, they confine us to the lowest level of joy.

The same goes for social and public institutions. Everything from schools and universities, the labor market, production, consumption, and social economy to defense, political steering, and so on to the whole collective form we call civilization – are represented by people and ideas we believe in and support because we think it will bring us happiness, but in reality confines us to low level happiness.

Here in Ball and Chain we’ll initiate the first step in changing everything.

The first step in Experiment 3 is to

outline the new way of looking at the Establishment.

We do this by looking at some of the Establishment’s most important elements and pointing out where they lead us on the new scale for happiness.

Figure 1 of 4. The goals that keeps us at the lowest level of happiness. Click picture to enlarge.

Figure 2 of 4. Institutions that keep us at the low level of happiness. 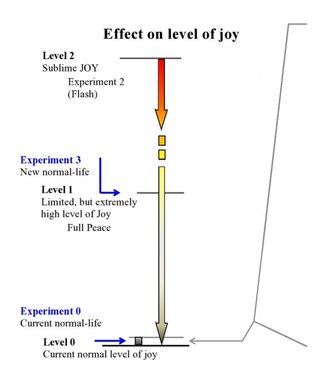 Every nation has its own set of institutions. Everything from the federal government, its administration and elected assemblies to institutions directly tied to ownership, business, and production. All are built to safeguard business and production against interference and opposition from the populace.

Look around you in your own country. Make your own list.

Figure 3 of 4. People who keep us at the lowest level of happiness. 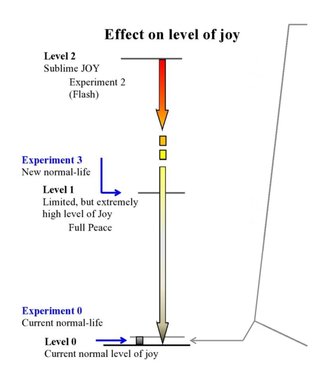 The owners: These people have many qualities, and according to the old way of thinking, they’ve contributed a lot. But they make up the core of the Establishment and, in the new way of thinking, stand for everything that’s holding us at the lowest level of happiness. Here are some of them.

The owned: Many qualities here, too, but the qualities the employee section of the Establishment stands for are dictated by the owners who can afford to employ them. In the administration - of business  and of representative government - we can find the faces of some of the owned.  (For the US we have the highest paid business bosses here,  Senators here and members of Congress here.) If we expand this to include the apparatus of government institutions, our universities and seats of higher education, the professional publishing houses and media, lawmakers and the judicial system, and of course, political and administrative management on levels from local/municipal to district/state and so on, there are plenty of others.

Figure 4 of 4. The ideas that keep us at the lowest level of happiness. Click picture to enlarge. 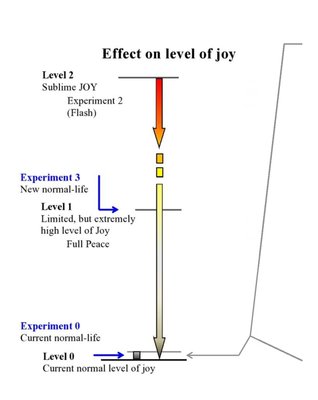 2. Economic growth is the ultimate goal.

3. Business and production must have highest priority

We live in a world where the goal is maximal happiness.

To lose happiness is to lose life.

We live in a world with New Logic.

When you fight for life, you lose life.

The essence of Experiment 3

What we don’t see when the idea-based logic is new to us, is that the master idea we practice determines how much happiness and fulfillment we experience. Nor do we see that when the Establishment forces us to practice the spin-off ideas they dictate instead of our own, they're forcing us to practice the master idea they dictate. And thereby dooming us to a life of less happiness and fulfillment.

It doesn’t matter whether or not we know we have a master idea, or whether we know anything about the laws of nature that apply in our idea-based world. When the Establishment/ established ideas compel us to live the prescribed “normal life” where all activity ends up in their repertoire of goals and methods, those laws of nature will catch up with us. The activity characteristic of “normal life” and civilization involves pursuing goals that contain little happiness using methods that steadily reduce that happiness still further.

Experiment 3 is about gradually abandoning the extensive repertoire of ways we actively pursue trivial goals using destructive methods, and gradually reinstating more relaxed activity in harmony with nature. With that, we initiate a far better private master idea. We pursue much more joyful/meaningful goals, we do it using methods that are in sync with the laws of nature, and the happiness and fulfillment in our lives steadily increases.

One distinctive feature of an altered private master idea in Experiment 3 is less activity. Or, to be more precise:

Gradually, to do less of the type of activity characteristic for civilization and the Establishment and more of the type that’s in sync with natural laws.

We’ve trusted in and supported the Establishment because we have an old idea about the world where the Establishment helps us find happiness. We’ve lived a whole life in that illusion. Letting go of the illusion is the first step in Experiment 3 and our quest to attain the higher levels of joy. The steps that follow it will be described in the book The Third Experiment. ….

More about Ball and Chain on the following pages: