The connection between the 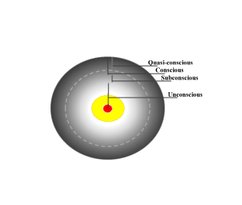 The area outside the dotted grey line is the quasi-conscious layer. This layer represents the fruits of the cosmologic illusion forged and perfected by science from the apparition called “matter”. It starkly contrasts a different tradition that has also tried to form cosmologies, but based on a phenomenon we know exists; consciousness. That tradition includes legends and fairy tales, religion, philosophy, and the New Age. The material quasi-variant was elevated to the status of mandatory curriculum and the corresponding darkening/decline in happiness has thus become a part of our conscious world. The Establishment that spawned today’s low level of happiness and is busy advancing new projects that will lower it even further, gets its inspiration and wisdom from within this dark layer.

Now to expand the figure a little. 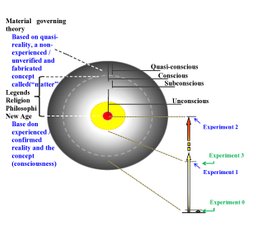 The two approaches for forming a cosmology (to the left in the figure) are positioned as they are to illustrate which aspects of reality they've been interested in making room for. Here it's easier to see the approach taken by legends, religions, philosophy, and New Age is highly commendable. Somewhat less commendable is science’s material approach.

At the same time, we must bear in mind legends, religions, philosophy, and New Age have little to contribute when it comes to how we’re to understand the atom and the oddities deep within physics. Therefore, they’ve never been able to formulate a scientifically verifiable governing theory. And more important: Because they haven’t developed understanding of the atom, they haven’t been able to discover New Logic. This is why even the legends, religions, and schools of thought in the New Age that have known about the wealth of untapped happiness and had its attainment as their goal have ended up with methods which at best yield very little. Thanks to the fruits of science’s efforts, we now have New Logic in place and can form an Experiment 3 that finally brings hope of success in having much more happiness here and now.

The startingpoint for Experiment 3 can be depicted like this: 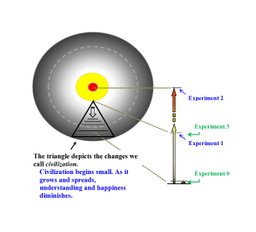 The principles for Eksperiment 3 and the hope of success in having much more happiness here and now can be depicted like this: 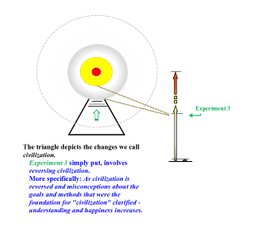 One part of Experiment 3 can be performed on a private level. That is, we can reverse / loosen some of civilization’s grip on our private lives. But many of the spin-off ideas we practice every day are dictated by civilization and the Establishment. This edict can only be removed by instituting changes we must make together. That's the other part.

In the book The Third Experiment, there’s more information about the details of both parts. And some thoughts about how and when the experience of sublime JOY and FULFILLMENT becomes available. (The state marked in red.)

And from all this comes The Surprise.

End note: In Figure 2, narcotics could probably have been included (together with legends, religion, philosophy, New Age) as a source of insight into the fundamental elements of reality. However, these are experiences that can only be attained at exceptionally high risk. Therefore, I do not recommend using them! But there are some interesting presentations of this type of experiment and experiences. Among them is this article written by Caitlin Johnstone.