Experiment 3 is about gradually increasing the experience of joy and meaning. In other words, it’s about changing two aspects of our lives.

Change the ideas: Replace the old material-based governing theory with the new idea-based one. That is, we base our lives on a completely different master idea, and in doing so, on a whole new set of spin-off ideas about life, the world, about how much joy there is, where we can find happiness and meaning, and how they can be attained.

Change the way of life: Gradually, we find more and more ways to practice the new master idea. Bit by bit we change the circumstances around our jobs, the kind of area and the kind of home we live in, our free time and interests – all in the direction of our original identity.

Our version of Experiment 0

It’s situated on the outskirts of this tiny reservation along the Oslo Fjord..

- Cindy lived in a condo in this noble old hotel-turned-condominium.

Gunnar lived in a house in this reservation inland.

The situation – our personal version of Experiment 0 looked like this:

Two factors ruled above all others in the reservation; debt / consumption on the one hand and the need for steady equivalent income on the other. In reality, possibilities to realize life’s dreams didn’t exist. And worse than that, having an inferior normal-practiced master idea meant we filled our lives with really bad spin-off ideas. They erased any dreams that didn’t conform and replaced them with the kind of goals that fortified the reservation.

Reservation-symptoms engulfed us. – There was never enough time, we based our lives on the information we got from the government and from main stream media and thought it was ok. – We became passengers on an express train of progress, silently condoning ongoing destruction. Beginning with the destruction of beauty in our immediate surroundings, then of Nature and the beauty throughout our country, of the ecological and natural foundation for life and the capacity for its sustenance and growth, of diversity, our own livelihood, of the kinds of choices we once had, of our freedom, and with that, the possibility to experience the greater form of happiness. Then expanding to include the destruction of the same values in other nations and on Earth as a whole.

Said in Matrix-terminology: We were clones of “Agent Smith”, taking an active role in the deterioration of The Matrix we lived in while living a life of minimal happiness.

The new idea-based governing theory was under development. Decisive elements were still missing, but we could discern many of the new possibilities it offered. We decided to follow curiosity’s lead and make some changes we thought would bring us closer to the dreams we still had. If for nothing else, than to find out if and how these changes would effect the happiness and beauty in life.

Gunnar sold his house and paid off his debts. We moved in together in Cindy’s condo. With these changes, possibilities arose.

We liked the outdoor life. A life of tenting, canoeing, hiking, gathering, hunting, and fishing. An exciting possibility was sailing. It was exciting because we had no idea how to do it. We could afford to take a course in sailing, but not a sailboat, too. Or we could afford to buy a small used sailboat, but not a course for how to sail it. We chose the sailboat and went to the library. 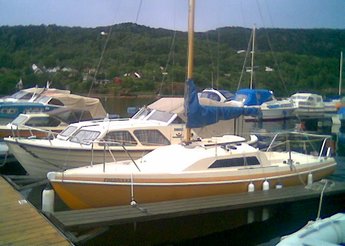 Changing ideas doesn’t have to be gradual. We can change them all at once. Just replace the old material cosmology with the new idea-based one.

Changes in way of life are different. These must be made gradually and they must be personally adapted. Everything written here outlines changes adapted to suit Cindy and Gunnar.

After two years, our situation had changed considerably. Sailing was challenging, but we could get by as long as we didn’t stretch the envelope too far. Our nutshell of a boat did open the door to a slew of new possibilities, but something else was far more important. We’d actually started to change our lives, and life responded by giving us more happiness and fulfillment. Together, those two factors were changing us. We were ready for more.

Looking back, we can take note of two important relationships in connection with increased happiness and meaning. Change entails

- accepting the risk involved and the feeling of uncertainty /apprehension

- taking the all-important first steps for every new change.

The second change (Experiment 3 was still not developed)

We decided to continue following curiosity’s lead; something only possible if we accepted more far-reaching changes and more risk. 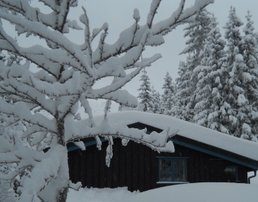 Gunnar had a cabin in the mountains that we could live in during the winter.

If Cindy sold the apartment and we sold the little sailboat, we could buy a sailboat big enough to live in during the summer.

The same day the apartment was sold, this popped up …. 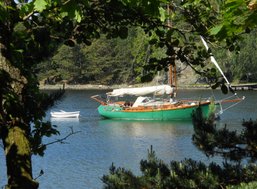 These changes led to more possibilities. 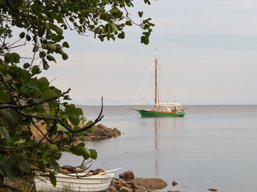 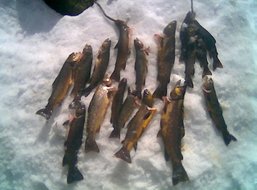 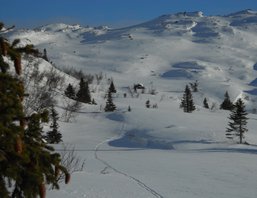 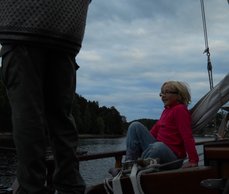 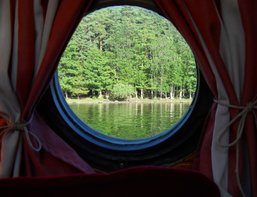 This is not a matter of reversing history

Experiment 3 is very different than changing your way of life by going back in time. History as we know it is a turbulent mixture of power and aggression / powerlessness and strife - all to gain a tiny fraction of happiness. And all tufted on equivalent ideas about a survival-of-the-fittest-world and how life works. To start an Experiment 3 in your own life is to change your personal ideas about the world until they embody the new and far more solid idea-based theory. And most importantly, to practice these ideas by acting in accordance with them.

After three amazing years, our situation had changed even more. Our level of consumption had gone down significantly and our annual living expenses were now considerably lower. The need for income had become so low that it was possible to use some of the money we’d saved to live on. And with that – cut out wage labor entirely. By carefully portioning out what we had in the bank to stretch until our pensions kicked in, we were in reality close to being able to take the final step out of the reservation.

Looking back, we can take note of two important requirements for increasing happiness and fulfillment. Change entails

- accepting the risk involved and the feeling of

- taking the all-important first steps for every new change.

We’d actually changed our lives a little more. Again life responded; this time not only by giving us more happiness and fulfillment - the background-music from the new theory had become audible. Together, these things had changed us. In addition, the final elements of The First Unified Theory were now in place and Experiment 3 fully developed: 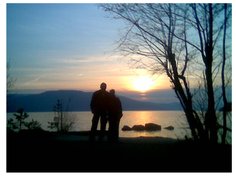