Seeking the perpetual amplification of joy

For all of us, no matter who we are or where we live, the most exciting thing about this new governing theory is the opportunity it gives us to personally create a life where the normal level of joy can be gradually increased to levels far beyond todays. I call it Experiment 3.

Up until now, we’ve all been living  Experiment 0, what we like to call living “a normal life”; where we habitually practice an active attitude (♂) in the master idea’s second part and get a comparatively low level of happiness as a result. That is, we strive to attain our goals but have relatively little happiness to show for it.

In designing  Experiment 3, the best information we can use comes from the tips we can glean from Experiments 0, 1, and 2. The principles for  Experiment 3 are simple: It involves reviving the joyful Creative Intention, and to an even greater extent, involves improving our ability to affect its realization. We can accomplish this by gradually switching from habitually practicing an active attitude (♂) to more often practicing a receptive (♀)  (making a change in the master idea’s second part). The theory and the results of Experiments 1, 2, and 0 all point to the same conclusion; this is the way to a gradual increase in our normal level of happiness and inherent support.

These pages on Experiment 3 cover how the idea-based logic works - explaining how the different aspects are connected - and outlining how to start changing your life and how much happiness you can experience on a regular basis. 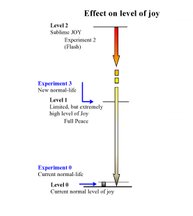 Master ideas, spin-off ideas and their

The correlation between master ideas and spin-off ideas is law-abiding.

It doesn’t matter if we don’t know what a master idea is. We practice a certain kind of master idea by practicing a certain set of spin-off ideas. That is,  we “inherit” a set of ideas telling us how we should live our lives – when we accept and apply them – then we’re practicing a specific set of spin-off ideas. Among these ideas, there seem to be plenty of opportunities to exercise free will. We can choose our friends, leisure-time activities, education, livelihood, work-load, domicile, interests, political ideas, religious ideas, and so on. But as long as the underlying strategy for the best way to arrange and live our lives is the same, all the suface strategies that seem to be alternatives belong to the same set of spin-off ideas. When we practice them, we’re practicing the same corresponding master idea.

Master ideas are cause. Levels of happiness are effect.

Master ideas can be altered. We can alter our normal master idea by changing the spin-off ideas we practice. In Experiment 1, the master idea was altered by temporarily sabotaging our customary compliance with all the usual spin-off ideas. This resulted in a flash that briefly unveiled the happiness hiding behind the ideas that make up “a normal life”. But we can also alter a practiced master idea directly. For example, by altering the second part of the master idea itself by putting aside the active attitude (♂) and instead practicing the receptive attitude (♀) (Experiment  2). Both experiments reveal the great magnitudes of joy that’s available, but are only brief, temporary manipulations of the master idea. As a result, the effects in the form of experiencing enhanced joy are equally brief and temporary.

What’s exciting is our personal normal master idea and what’s really exciting is improving it - to make a lasting improvement in the master idea we normally practice and live out an improved level of happiness and fulfillment in our everyday lives.

We already have a normal master idea, we practice it every day.  It’s the one we’ve brought to life by practicing the set of spin-off ideas we’ve inherited through culture, civilization, and tradition. For simplicity, I’ve called this whole “normal” situation Experiment 0. It results in a state of affairs where the normal level of happiness is low. Experiment 0 is well worth an analysis; it may help us find our way to a normal master idea that can give us much higher levels of joy on a more permanent basis than the flashes experienced in Experiments 1 and 2..

A master idea is made up of two parts. The first part encompasses Intended Creation (the part with the maximally joyful ideas). The second part determines the ability to realize Intended Creation. We’ll set up a schematic presentation of the two temporary experiments. And we’ll start with nr.2:

According to the theory, sublime REALITY was the original blissful situation for “us”, for the shared universal consciousness. (The lost Heaven/Nirvana/Self/The Highest, and so on that all myths and religions are built on.)

This is no longer the situation. A dramatic change took place, brought on by a radical drop in the level of understanding about the idea-based logic (New Logic) and the consequences this had for the corresponding master idea. “We”  had probably come up with the catastrophic idea of using a little bit of activity (♂) to help realize Intended Creation. With that – we suddenly practiced a completely different master idea, the one I’ve called the limited Master Idea (Reduced from all capital letters to only capital initial letter to mark the difference.) The dramatic change in cause (master idea) unleashed a corresponding dramatic change in effect - Big Bang – “we” arrived at a limited reality. Life here on the planet began with a situation where the limited Master Idea was the new one we normally practiced, and where we experienced a correspondingly limited form of Inherent Support and Happiness.

But this is no longer the situation, either. From that point on, “our” level of understanding has continued to deteriorate.

Because the idea-based logic has already been misunderstood and led to limited realization and its plunge from sublime REALITY to limited Reality with its corresponding reduced level of Inherent Support and Joy, there are plenty of opportunities for further misunderstanding. Which takes place as soon as we try to increase activity to compensate for a reduction in happiness. With that, the applied master idea with its level of understanding sinks further still. The boomerang comes back and smacks us with a reality that’s even less supportive and joyful. And this isn’t the only thing that deteriorates.

In a world less supportive and joyful, we also lose sight of Intended Creation. We think the only level of happiness is the one we currently know about. And every attempt to compensate for loss of support and joy by increasing activity ends in further loss and leads to renewed efforts to compensate by increasing activity. To put it another way, every time we try to fix what we’re dissatisfied with by trying harder, sacrificing more, enduring longer…ends in further loss of support and happiness – and to further increasing our disappointment and frustration. This leads to renewed efforts to do more of the same, hoping it will lead to more happiness…. We’ve come to the normal situation today as we know it from everyday life.

Experiment 1 is a temporary glimpse of that lost world. In principle, this glimpse takes place as a result of the temporary violation it is to deny our customary practice of the bad spin-off ideas we’ve inherited. By not complying, we’re also refusing to practice the bad master idea. This sabotages the bad cultural inheritance and we fall back on the underlying (and much better) limited Master Idea. Experiment 1 doesn’t produce a glimpse of sublime REALITY with corresponding INHERENT SUPPORT and JOY, but still shows us a huge improvement on our everyday lives.

Slightly inaccurately, Experiment 1 can be depicted schematically like this:

Now let’s look at Experiment 0. And we’ll begin with a short summary of the downward-spiraling development that started when we arrived on the planet.

To better see the pattern in this evolution of master ideas, Experiment 0 is portrayed in the same schematic way as 1 and 2:

We can’t find the happiness and fulfillment we desire where we thought we’d find them. And we can’t get them doing what we thought we had to do to get them. What can we do?

The principles for Experiment 3 are simple. It involves revitalizing the joyful Intended Creation and, to an even greater degree, involves improving our ability to realize Intended Creation. This is done by consciously using the master idea’s second part to reverse the downward spiral. We can do that by gradually shifting from habitually practicing an active attitude (♂) to practicing a receptive (♀). This change leads to a gradual and more permanent improvement in our normally-practiced master idea and consequentially, of gradual and more permanent improvements in inherent support and happiness/fulfillment.

The theory and the results from experiments 1, 2, and 0 all indicate the same; this is the way to gradually raise the normal level of happiness to that of Happiness and Inherent Support.

unprecedented level of happiness and fulfillment

are the complete opposite of the methods we employ

today in our attempts to gain access to meager pleasures.

And the happiness and fulfillment at this unprecedented level are gratis.

Just about everything we do in today’s “normal life” we do because we believe it will bring happiness. When happiness is free and can be had in far greater measure by doing things differently, there’s no longer any reason to continue doing them the way we do today.

Experiment 3 is about one thing only: gradually practicing fewer of the old ways of doing things we’re all accustomed to from Experiment 0, and practicing more of the new ways.

With this, we’re confronted with an unusual challenge. If we want access to the great levels of happiness and fulfillment, we have to relinquish the ideas we trust today.

The pages called Ball and Chain present a small gallery of concepts and institutions we trust in, but actually shackle us to the low-level joy characteristic of today’s normal life/way of living. It’s included here to prepare the reader for the big changes that constitute Experiment 3. This experiment is under development and won’t be presented in detail here on the web. (Although, Ball and Chain already paints a pretty clear picture of some of the areas that will require changes and what the changes in these areas entail.) In the book, The Third Experiment, an outline of the specific changes will be presented. The book also provides a more thorough presentation of The First Unified Theory with emphasis on the details most relevant for us to develop Experiment 3 and finally satisfy our hunger for a higher normal level of happiness and fulfillment.