The results & their relevance for verification

Is reality something we can change? Yes, in an idea-based reality, it appears this is possible. And it’s possible to test it with experiments.

The experiments test whether modifications made to one of the two parts that comprise a master idea can actually change reality. More specifically, these experiments involve affecting the realization of the master idea’s first part, the joyful Intended Creation, by manipulating the second part, the ability to realize Intended Creation. The situation at the outset is what we call “a normal life”, referred to on these pages as Experiment 0. In other words, our continued practice of the active attitude /♂ in the master idea’s second part and the results we see daily, our comparatively low level of happiness/satisfaction.

The experiments confirm the existence of Joy in unprecedented magnitudes. At the same time, they confirm The First Unified Theory. 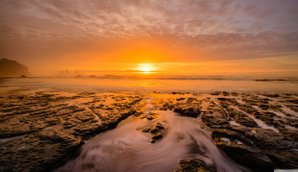 Verification of statements from the The First Unified Theory

Experiments can be important in deciding the validity of rival theory-candidates. This sort of assessment requires that we identify the founding assumptions and/or consequences of the logic that’s characteristic for only the one theory, and not for both. And to do this for each of the candidates. Let’s take a look.

The First Unified Theory states reality is constructed from a master idea comprised of two parts. The first part describes Intended Creation, a maximally joyful reality. The second part decides the ability to realize this reality.

The master idea’s first part: Intended Creation is always present in the format of sublime JOY.

The master idea’s second part: This describes the ability to realize Intended Creation. It can be found in two fundamentally different versions:

Because the idea-based logic has already been misunderstood and thus led to limited realization with a corresponding vastly reduced level of Inherent Support and Joy, there’s a good chance further misunderstandings will follow. This happens as soon as we try to increase activity to compensate for the reduction in happiness and fulfillment. As a result, the applied master idea’s level of understanding deteriorates further still. The boomerang comes back and hits us with a reality that’s even less supportive and enjoyable.

In a world that’s less supportive and joyful, we also lose sight of Intended Creation. And every attempt to compensate for the loss of support and joy by increasing activity results in further reduction, which in turn leads to renewed attempts to compensate by further increasing activity. We end up with a self-reinforcing reduction in understanding both Intended Creation and the ability to realize it. The result is a master idea that has one of the lowest levels of understanding with its corresponding low level of support and joy.

Based on this new form of logic, it’s reasonable to assume the above is the situation underlying what we call a normal life.

Experiment 1 involves examining what we call a normal life. The First Unified Theory states that as activity increases and the level of understanding in the applied master idea sinks, Intended Creation will become less discernible (and consequently, the level of experienced joy will also sink). Ordinarily, we’re not very conscious of the master idea we’re practicing. We just act upon the spin-off ideas that are characteristic for it. Experiment 1 involves arranging a temporary manipulation of the master idea we use in our so-called normal life by refusing to practice our customary set of spin-off ideas.

If the premise about the joyful Intended Creation is correct, and if it’s also correct that we practice a master idea by practicing the spin-off ideas that mirror it, then the results ensuing from a manipulation like the one described above should be completely unexpected when viewed from the perspective of the material theory-candidate. We should be able to once again see the vast measure of joy which accompanies Intended Creation; the same joy that’s ordinarily invisible to us, made invisible as a consequence of practicing the spin-off ideas of a normal-life.

Nothing in the material theory indicates joy of this magnitude is a reality. A closer look reveals this class of joy is even in direct conflict with it. According to the material theory, species evolve through coincidental changes in properties which enhance a species’ ability to succeed in the struggle for survival. Joy in the magnitude we’re talking about here will prompt the species’ individuals to be less interested in the ongoing struggle for survival. According to the material theory, this is a property of reality that would quickly be eradicated through natural selection.

Experiment 2 involves examining the ideas in the atom. The First Unified Theory states the atom's quarks U and D correspond with the ideas of an active attitude / ♂ and a receptive attitude / ♀. The theory goes on to state that the implementation of the idea of receiving / ♀ will lead to unlimited realization of Intended Creation. Experiment 2 involves arranging a temporary manipulation of the master idea by practising the idea which the theory proposes is the D-quark – the idea of receiving / ♀.

If it is correct that the D-quark is the idea of receiving / ♀ and Intended Creation is always present in the optimally joyful format, then the results ensuing from a manipulation of the kind described above should be completely unexpected seen from the perspective of the material theory-candidate and be in direct conflict with it. (The reason for this under Experiment 1 above.) Seen from the perspective of the idea-based theory, we should be able to expect this vast measure of joy to not only become visible, but also that it’s given to us.

Quotation from notes written shortly after performing the experiment: “The first thing that hits me when I think of this experience is the surprising dread I felt toward releasing everything in my consciousness. Whether it’s thoughts or emotions being 'forcibly released', a reproach crops up.”  (Later addition: Initially, this reproach is hardly noticeable and non-verbal. It’s present only in the form of uneasiness or a feeling of slight discomfort. As discipline is maintained, the reproach becomes more pronounced. Still non-verbal, but stronger. The two opposing forces, the discipline to ignore the thoughts and the pressure to give them my attention, crush against each other. The pressure from both intensifies. Little by little it grows extreme. The accusations can be verbal and loud; in the end the feeling of dread peaks as the fear of death.) And “with an immense effort of will, I pushed also this reproach aside. (…) And the next and the next and on and on through the churning, screaming indignation and all the world’s terrors, (…). Continued on and on, pushed past them, clinging to the present moment. – And then it happened!

A soft, sweet quivering.  The portal to a great emancipation. Like a doorway opening to a light of inconceivable joy. On its threshold, a vulnerability and overwhelming sadness that holds me back. Inside the room, a blinding light and boundless serenity tempting me to sacrifice everything to gain entry. Because there It was! Finally! The radiant Homecoming! The glimpse of the only Reason for all yearning and all thirst! The Meaning of everything and the fulfillment of all life!

Even this tiny glimpse through the doorway is enough to immediately strike me as the acknowledgement of Truth: - This room is ‘the salvation’. ‘Hell’ is not being there.”

The result of Experiment 1 is that joy in hitherto unknown magnitudes becomes perceptible, yet remains out of reach. The experiment in refusing to practice the spin-off ideas that accompany the conventional master idea (the type with the lowest level of understanding) appears to confirm The First Unified Theory’s premises that:

Quotations from notes: “And then it began to happen. A spontaneous feeling of Fulfillment jumped onto the scene in my consciousness. A premonition of something extremely wonderful. Something familiar and exceedingly dear that filled my consciousness like an exultant cry of recognition after having been forgotten. And while the excitement between receiving it and the temptation to commit the small manipulative act of trying to grab it quickly began to grow, a sweet fulfillment arose. A radiant Softness. One bearing the promise of heavenly hights. A silent flood of Openness, Purity and Bliss. And as It rose and rose, the sweet reminiscence of reunion became stronger and stronger and still stronger. An exultant acknowledgement that all the worlds’ hopes are well-founded! Both those we still dare hold on to and those we no longer dare contemplate. The eternal longing and perpetual thirst are telling the truth! And the more Happiness there was racing through my consciousness, the further it pointed beyond all limitations. The hopes of reuniting swiftly gained intensity and became unbearable. It became more and more impossible to abstain from mentally reaching out and grabbing It. With still more discipline, I continued to keep my mental hands off. It continued to gain intensity. More tremendous hopes, more unbearable excitement, and even more impossible discipline. And there, the deluge was released! A thrilling tremor throughout my whole body reached the center of consciousness and all the world’s Joy descended upon it! The bubbling volcano of intensely glowing Love that descended over it, was about to completely encompass it, about to drown it, change it, make it part of Itself. A silent, thundering roar, ten thousand orgasms, an all-consuming ocean of intense light, a glowing bath of Joy’s lava. Happiness, Fulfillment, Reunion, Love.  All the world’s gold was melted and about to fill everything, about to fall in place in its form. That form was Me. It was Us at the moment of our meeting. Everyone and Everything. In one tiny moment we would be united. In one tiny moment I would be in the lap of The All. Just one more tiny step, and I would be at the Zenith, the Goal, and could breathe in the exhilarating deluge of pure and unlimited glowing JOY and FULFILLMENT. But then, just as it was about to happen, everything fell apart. In the intense excitement, discipline broke. Mentally, I tried to seize Completion with unstoppable ferocity and greed - and everything collapsed and was gone. The experience occurred several times. Every time the same thing happened. This kind of discipline doesn’t exist. This isn’t the way. But I did get to see where we come from and know where we all want to be. (...)”

Even when compared with the other experiences of Joy described earlier, this one’s in a class all its own. All the qualities that apply to this experience are noted in capital letters only. For example, JOY, FULFILLMENT, BEAUTY, HARMONY, SERENITY, and so on. (More about this in the book entitled The Third Experiment, where the theory and its consequences are presented and examined in greater detail.)

Relevance for the verification:

Experiment 2 results in  the experience of JOY in hitherto unknown magnitudes, and that this time IT is given us. The experiment in practicing the idea of receiving seems to confirm the following premises of The First Unified Theory:

Experiment 2, like Experiment 1, also confirms the new theory on the following: