and shifts in experiments

“The historian of science may be tempted to claim that when paradigms change, the world itself changes with them. Led by a new paradigm, scientists adopt new instruments and look in new places. Even more important, during revolutions, scientists see new and different things when looking with familiar instruments in places they have looked before. It is rather as if the professional community had been suddenly transported to another planet where familiar objects are seen in a different light and are joined by unfamiliar ones as well.”

A new theory invariably represents a new form of logic. As a result, a new theory will always be at variance with the form of logic already established. It is a theory’s form of logic that designates what kinds of experiments it deems relevant. We now have a new theory - The First Unified Theory. Consequently, it’s now this new theory’s form of logic that decides what experiments are relevant.  Under the old material theory there’s no reason for us to expect any more happiness than the levels we currently acknowledge. Under the new idea-based theory, experiencing joy in unprecedented amounts and intensity is a logical and natural possibility. It’s interesting, then, from a scientific point of view to set up experiments that might confirm the existence of these magnitudes of joy. It’s even more interesting on a personal level. Experiments 1 and 2 confirm the existence of overwhelming magnitudes of joy. (See figure under Experiments 1 and 2 Results.) They offer us prospects of unprecedented levels of happiness and fulfillment in our private lives. 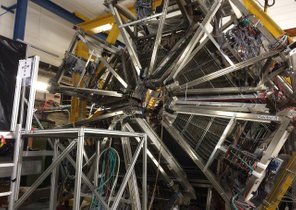 Quantitative properties of subatomic entities (fundamental ideas) can be studied through manipulation in an accelerator.

Qualitative properties of subatomic entities (fundamental ideas) can be studied by manipulating consciousness.

The shift from a matter-based to an idea-based governing theory constitutes a paradigm shift in logic and understanding. A shift in understanding leads to changes extending far beyond the theory itself. Among others is the stance on what constitutes relevant experiments. (Thomas Kuhn’s The Structure Of Scientific Revolutions)

As individuals with consciousness and intelligence,  we are a part of the sublime CONSCIOUSNNESS and INTELLIGENCE that has created the universe. In principle, we can study CAUSE from within.

The ideas that surface during this type of experiment become part of the test results. The wording in these ideas needn’t describe reality 100% correctly; it will always be subject to the views and culture characteristic for the person performing the experiments. But it’s the best version an individual with limited understanding can receive from a consciousness with a higher - or complete understanding of reality.

The ultimate goal of all research is to understand reality better. With this type of experiment, better understanding is given broader validity. The CONSCIOUSNESS and INTELLIGENCE that created reality/the universe with joy-maximation as ITS goal, possesses full understanding and fully acknowledges the sublimely JOYFUL result. As we extend ourselves to reach ever higher levels of understanding, more and more of reality will be acknowledged. And simultaneously, more and more of the joy.

What about science’s requirement of objectivity?

In science, assigning weight and significance to experienced idea content and feelings as outlined above is a rare occurrence. At first glance, it seems to breach the old requirement that science must be objective. But referring to objectivity has never been able to rescue a theory from the fact it must first be built on subjective hypotheses. Nor has it ever hindered a theory with no right to live from receiving artificial resuscitation from subjective conviction.

The only thing that has contributed to the solidity of science throughout the centuries is the requirement that a theory be able to explain reality. If the idea-based candidate is better able to explain reality than its competitors, it doesn’t matter that experienced idea-content and feelings are subjective. Viewed objectively, it is the more solid theory.